Sedimentary exhalative (SEDEX) deposits are bedded or laminated, tabular sulfide–rich bodies in carbonaceous shales or other, fine-grained clastic rocks. (Carne and Cathro, 1982). These deposits are an economically important source of lead, zinc, and silver. It is interpreted to have been formed as a result of hydrothermal activity which are released in a basin on the sea floor, resulting in the precipitation of stratiform ore. The host rocks are generally shales, siltstones, and carbonates. The host sediments represent both low and high energy depositional environments with locally derived breccias becoming important in the latter (Large, 1983 in Evans, 1993). The ores are finely layered and often interbanded with rock material, with both being affected by soft sediment deformation suggestive of a syn-sedimentary origin of the sulphides.

Large (1983) categorized the setting of sedex deposits into three order in terms of a hierarchy of sedimentary basins of decreasing size. First order basins with lateral extents of hundreds of kilometres may be either epicratonic embayment into continental margins or, less importantly as hosts, intracratonic basins. Second order basins are tens of kilometres in size, occur within first order basins and contain third order basins. Third order basins have less than 10 kilometres in diameter, within which the stratiform sulphides are accumulated. Both second and third order basins are bounded by syn-sedimentary faults leading to rapid changes in lithological thicknesses and the development of decris-flow breccias. The environments within the third order basins appear to have varied from deepwater, sediment-starved, and anoxic, with a high sediment input of turbidites and shales, to shallow water, oxygenated, carbonate-filled basins, which may even contains anhydrite beds indicating evaporitic environments, or even to lacustrine environments (Sangster, 1990). These third order basins acted as morphological traps into which dense, metal-bearing brines appear to have flowed from distant vents to form brine pools, which then lost heat and salt to the overlying sea water, leading to the precipitation of fine-grained, layered sulphides. The majority of sedex deposits do not appear to be underlained by stockwork feeder zones and are therefore regarded as distal exhalative, unlike the volcanogenic massive sulphides which are dominantly proximal exhalative.

Russel et al. (1981) explains how metal-bearing brines generated. Exhalations were formed by sea water convection cells similar to those shown in Figure 1. which dissolved base metals from the rocks they traversed. Such cells would only have to penetrate a few kilometres into the oceanic crust in order to be heated to and sustained at the necessary temperatures, if supplied with the latent heat of crystallization from a magma chamber (Cann & Strens, 1982). 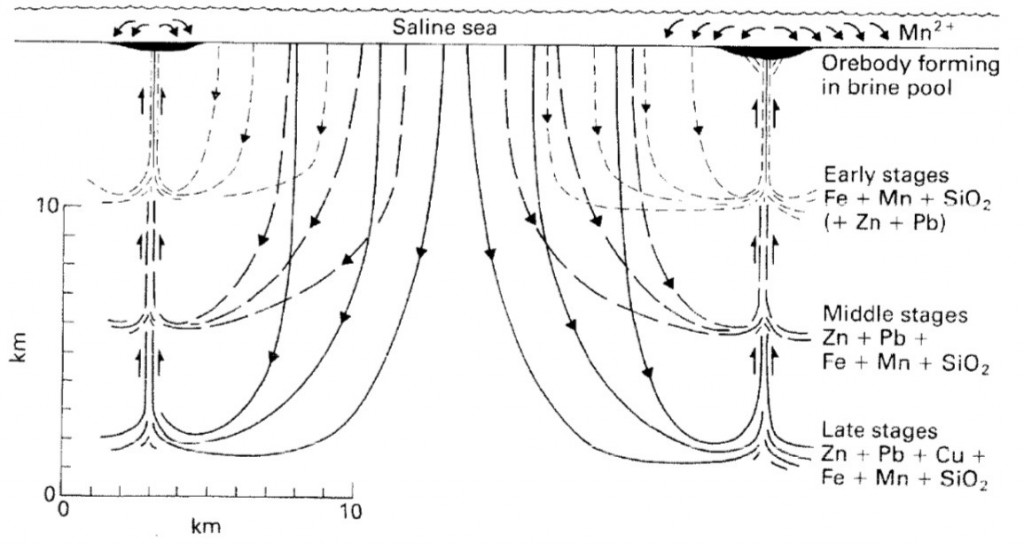 Figure 1. Diagram showing how sea water circulation through the crust might give rise to the formation of an exhalative, sediment-hosted, stratiform ore deposit. (After Russel et al. 1981 dalam Evans, 1993)

Sedex deposits can be found throughout the world from the west to the east. More than half of the world’s Zinc and Lead has come from sedex deposits like Mt. Isa in Australia, Red Dog in Alaska, Sullivan Mine in Canada, Broken Hill in Australia, Howard’s Pass in Yukon, Mehdiabad in Iran, Black Mountain in South Africa, etc. In Indonesia, sedex deposit can be found in Sopokomil, North Sumatera, currently held bt PT. Dairi Prima Mineral with zinc sulfide ore as the primary target, and galena which is the mineral form of lead sulfide and silver as the secondary target. This area has been explored and also the reserves and resources have been counted, but until this article published (April 17th 2016) there are still no news about when will the mining activities in this area begin.