Precious Ore Minerals (Gold, Silver, and Copper) and Their Characteristics and Genetics

There are several terms that commonly used to ore:

Geochemistry of Gold and Silver

If we consider the origins of epithermal deposits we can distinguish three classes based on the fluids that formed the deposits: two formed dominantly from end-member fluids, and one from a combination: 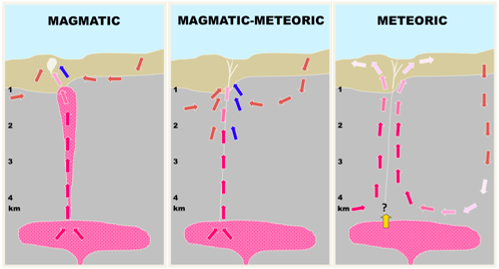 There are 2 forms of deposits :

The geochemical properties of copper are dominated by its great affinity to sulphur, which characterizes the “chalcophile or thiophilic elements” Cu, Zn, Ag, Cd, In, Hg, Tl, Pb, Bi, As, S, Se, Sb and Te. Although Cu is redox-sensitive, both Cu. and Cu2. are mobile cations under oxidizing conditions. Copper forms stable complexes with organic substances. Copper is adsorbed by clay and Mn-Fe oxyhydroxides (e.g. the manganese nodules of the deep sea). Its average abundance in the crust is 68 (14–100) ppm, 100 in mafic magmatic rocks and 10ppm in felsic rocks. Acidic and sulphur-poor ore-forming hydrothermal solutions transport copper mainly in the form of chloride complexes, such as (CuCl)o >250o C and CuCl32+ or CuCl2– at lower temperatures.